skip to main | skip to sidebar

I started this a couple years ago and then kind of let it drop. I am more of a talker than a writer I am afraid. But the place I am in these days I don't get much talking opportunities, unless it is to animals.
Much has happened in my life since I last wrote. I will share soon.
Posted by Wendy at 9:23 AM No comments:

Wendy and the Lost boys.

Last night was the monthly Feast at my home. It is something my sons started. Even though they have moved out they still want to hold it here because of tradition. So they all show up with food to pass and enjoy a meal together.

A new young man came this time and when he heard my name he made the comment in the title. I have been chewing on it ever since. Because I really see this as a ministry. This truly is a bunch of lost boys! I have yet to feel as if I am having much of an impact but am praying the Lord will open doors. I am now just continuing to build relationships. I have had a few good conversations with one of them over IM.

The new guy had a potty mouth that would not quit! He also thought he could have a beer. He was 17!! I am not a fan of drinking but will not stop an of age person from drinking a beer with dinner. But I told him he could not drink because he was under age. Despite that he said he would be back next month. So if he shows I will work on the usage of offensive language in my home.

I pray that the Lord gives me a vision of how to love them with His love and show them His grace. I keep thinking about how in the Peter Pan story Wendy "mothered" them. It is a stretch for me as I have a hard time being bold. But it seems as if this is my call at the moment.
Posted by Wendy at 9:34 AM 2 comments:

We pulled it off! 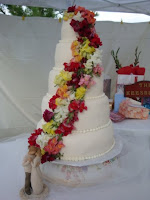 Last weekend I helped with a wedding reception. It was interesting to say the least! I did appetizers and pasta salad. My daughter did the wedding cake. It tasted as good as it looks.

We did it all in a home kitchen that was not well stocked. There were 300 RSVP's, so no small undertaking. The mother of the bride and the bride seemed unconcerned so I decided not be to either! I still can't believe everything went as well as it did.

This has made me think I can handle about anything!
Posted by Wendy at 9:26 AM No comments:

I love stoneware from the Pampered Chef! Almost cried last time I broke one! He is a chance to win one for yourself.
Posted by Wendy at 1:51 PM 2 comments:

Choosing how to react.

My husband told me something yesterday. I am struggling with what I should think about it. He shared that a friend of his told him he was proud of him because he has not become whipped. In my husband circle the worst thing a man can be is controlled by a woman. This is not a group of men who understand headship or anything like it. Most are divorced because they do not know how to treat a woman. They are immature men who still want to act like boys. They all also do not know Christ so behave accordingly.

So when he said this to me I had two conflicting feelings. One was negative, thinking. yep, you have never put me or your family first. Which unfortunately they would interpret as being whipped.

But the other one was happiness that I had not, though my pushing, taken something from him that is of most importance to him, his pride. Even though I believe that a true man would put his wife first no matter what his friends thought. He is not in that place yet. Although in the same drive a song can on the radio and he commented he hated the song. I asked why, as I love it. It bothered him because it talked about missing your kids when they were grown. And he confessed he missed out on their childhood by his poor choices. And this song reminded him of that.

I want to put aside the thought of feeling upset because he cares more about his pride than me. But I also am glad that I am working on being a helpmeet to him, right where he is at now. So am I crazy to try to focus on the fact that I have made myself fit for him, even when it seems to cost me dearly? The battle is waging in my heart. Which will I choose?
Posted by Wendy at 10:59 AM 2 comments:

Wow this blogging thing is harder than I ever thought. I either can't think of anything interesting or I am too busy to take a minute out to do so.

I have been enjoying the empty nest. It is nice to not have so much cleaning to do. They tried to tell me they cleaned up after themselves. I have proof now that was not the truth. I do miss their company, and so does their father. This is funny because he was the one pushing them to move and now he wants to visit all the time.

I have decided to pursue becoming a midwife. I have thought of it many times over the years. But now I have more freedom to do so. It is not easy to figure out the steps, there is no clear path. I now am just investigating, trying to come up with my plan. Finances will be a real issue. We live paycheck to paycheck, so big expenses are out of the question. I am just going to trust that if this is the Lords will for my life He will make a way.

I am going to Ohio next week to help with a wedding. It is ending up to be much more than I bargained for. But the bonus is I will get to see my grandchildren, though I may be too busy to do much with them.
Posted by Wendy at 6:47 AM 4 comments: